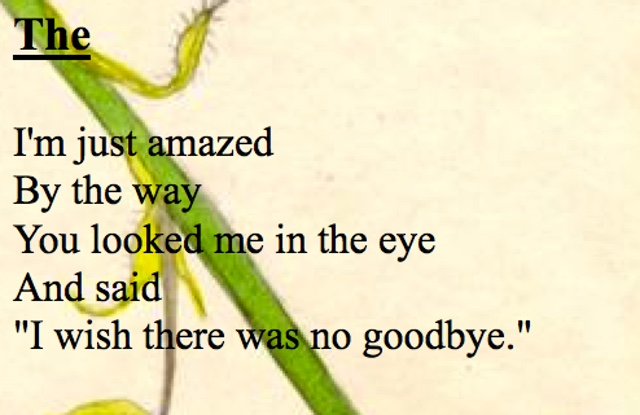 Variation on a Theme by Sid Graumann's Chinese Theater

Forget breasts: Let's rip the bodices off
Victorian feet, buttoned up the sides into

boots that sublimate their pitter-patter
into style. Or our moderns –– mature, minimalist,

swollen-from-the-ankle-down & infant
toes that come after them, plump & wiggling This

of Hermes (who would eventually leave battle
strategies for stilettos, but ––)

–– sshhh –––– The orchestra's
begun, and Karen Kain's feet are kicking off the first

notes of Swan Lake, like silver
grains tossed across a darkened stage.

A Boy and His Unicorn Six Months Later 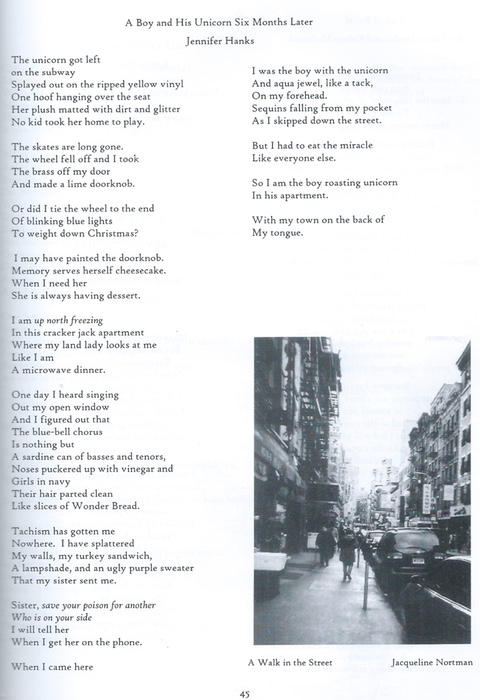 For too long we have mistaken a value judgment for fact

Why should the monotone, the straight line, the static
be good?
While the mellifluous, the curve, the fluxtuous
be bad?
The norm is fifty percent each way.
I don't ask for a landscape of mountains alone.
I appreciate the plain as well.
I only ask that those who struggle up the mountains
and careen down their sides.
Not be chained by callousness, custom or courtesy
to those who plod
staidly through the flatlands. 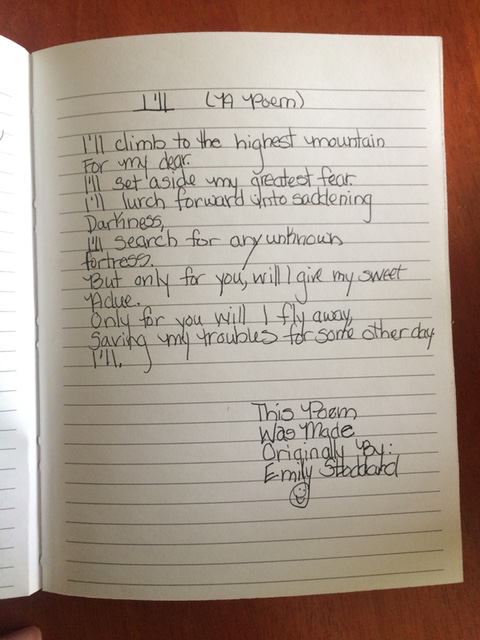 in the hallways,
hems high, heads low,
we grope for sets of fingers
clasping, strangling
tiny, French-tipped pythons
seizing victims.
greasy tresses - hard, uncoiled
hang like straw
but reeking, overcooked
(we still hide the kinks)
and at night
the illusory chests pop from
wire-strung nylon
and stale ideas
padded
for…
…"umph",
whose different incarnations
perch like birds of prey on shelves
to lather on canvas,
like an artist.
to hybridize and brew,
like a witch. 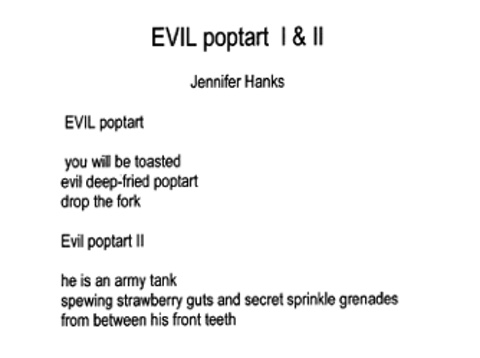 Poem About Weather and Mood

There is no room for laughter in the sarcastic biting snow.
The slush eats my soles. Pressure flows from the spigot
like the swollen creek overpowered Grandpa's levy. I'm drowning in it.
I am awake but time is too short for consciousness; there is only
DO, DO, DO until the reaching oak is nothing but a memory.
There is something comforting, though, about thoughtlessness.
Tasks ahead whirling and dancing, distraction forcing the
darkness into its hidden well. I'm off the wagon, now.
The primary colors of homemade frosting tempted and I gave in.
I wish we would screw every day, it would be such a relief to
feel you. Climax would be a welcome release.
Thoughtlessness in another way, of course, but
warmer than the snow and quieter than the rusty wheel.
But you and icicles are too much alike, and you're afraid
the fiery flesh of my flower would melt you away. Why you don't want
to melt I don't know, but either way I'm stuck here in the blizzard.

Tongue-playing, they snake,
intertwine on a bed of rushes.
She unbinds her hair, amber-
mouthed and kohl-eyed, reaches
for the shepherd's staff,
his reed growing high,
as the Tigris and Euphrates
flow over. He pours
into her holy churn. Her honey-
man, her honey-moon, risen
from compost. Sweet as
cedar and juniper resin
burning. Inanna
and Dumuzi, her shepherd
king, unlike Jesus.
She holds him in her yoke until he lows.

A dispute with another party 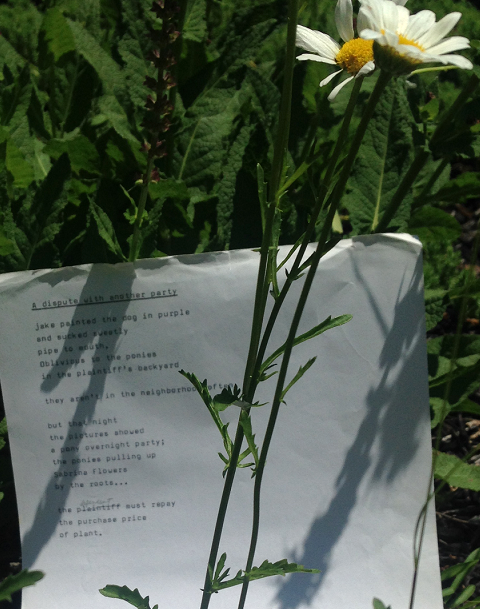 I hear the summer thunder
all through the hot still night,
like a moan turned to a shudder
or a distant tribal rite.
Though the sound is low and trembling
from a source I cannot see,
the rumblings somehow articulate
all the longings deep in me.

Stump-legged, she dragged laundry
from the car, thumped it on the curb.
Shut the hatch, took up her load again.
This street is quiet enough to notice

these things. She put her
unmentionables at the bottom,
layered under neatly folded
housedresses, skirts, the cardigan

her son brought last time
he came from Boston. She put
them on the bottom lest
they blow away. At the steps,

She set the basket down,
caught her breath, lit
a cigarette. Turned her face to
the sky, squinting through the smoke.

Shortly, inevitably, it began to rain.