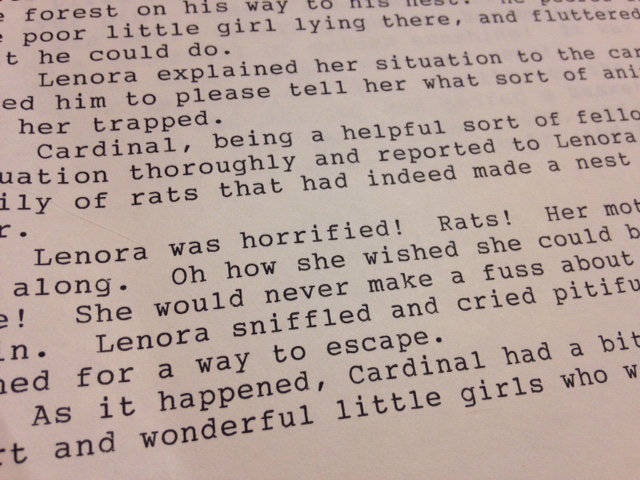 Elegy for the Alleged Virgin

THE PROOFREADER GETS TAKEOUT


She likes the sign in the window:
Waitress wanted. Must have experiences.


THE PROOFREADER GOES FOR COFFEE,
ON A GOOD DAY


At Wolfe’s Lunch the Dry-Erase board says TODAY SPECIAL.
Yes, it is, she thinks.

Hamsters, hamsters,
So gentle, so soft.
They never are rough
But can be tough.
As colorful as a tree
They like to be free.
They have cheeks that are sometimes fat
And they’re nocturnal like a bat.
They love to run on a wheel
But don’t swim like an eel
They aren’t mean
And they’ll never make a world-takeover scheme
They are different from us in many ways
But they are cute in all our days.
Even if you own one not,
Seeing them will make you think they are a tot.
They don’t eat candy,
But that does not mean they are not dandy.
Their worst enemy would be a cat,
They can not use a bat.
They can not play baseball,
But they can roll in balls.
And they still make a great pet,
And they’re still my favorite, you bet!

The alien felt lonely: he had no objects. No eyes with which to view high-definition television or admire the sleek shine of a new model auto: No ears to cover with Discman headphones or take in the improved quality of the new MP3. Cerebral from head to foot, insensate: he thought thoughts to himself and transmitted them into the broadcast spectrum. No one responded; everyone looked away, down, into themselves sort of, as if they hadn't heard. No legs to strengthen on the latest late-night infomercial exercise machine: No hands to control joysticks. Shape, form—his people are done with those words. But we're not, yet, never to be, possibly, so: s/he was shaped like a—blob, a very small blob, malleable, bearing any imprint, like a piece of gum collecting lint and dirt on a shopping mall floor. He lay supine (those these words are necessarily anthropomorphic) on just this very shopping mall floor in Minnesota. It was Black Friday; intelligence reports from his native Tlön speculated that this was a vast world-wide holiday, a thanksgiving, as it were, like they used to have in the old days, when he was the same age as he is now. No genitalia to insert into or (however it may be) be penetrated into by rubber people. So it's like he couldn't see what was going on around him, sure, on some level that's true. He didn't see the pack of teenage girls chewing gum and clomping awkwardly with feet too big by far, or the families (led by screaming mothers) on the run from some domestic discomfort. He didn't hear the Muzak piped over the Intercom, nor did he he smell the chemically enhanced popcorn emanating from the Food Court. Shoes stepped on him--he felt that. Corporate swirly traction patterns deformed his formlessness. Nobody even apologized.

But he, what's the word...heard (in the mind's lone manner) the thoughts of the people trudging from store to store, in families or friend-packs or desperate solo missions, and what he heard, again and again and again, like an incantation or prayer, was the word want. Tlön had no adequate translation for this word.