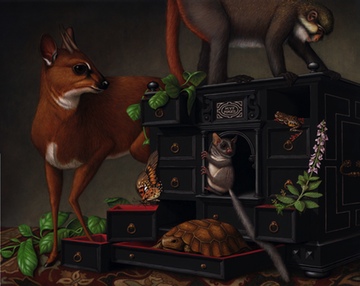 Editor's Note: In addition to kindly allowing us to use Ebony Cabinet as our Summer Edition graphic, featured artist Madeline von Foerster also agreed to an interview with Menacing Hedge. You can click the image to get a larger view, and see more of her work at www.madelinevonfoerster.com.

An Interview with Madeline von Foerster

Menacing Hedge: As a person who is saddened by mankind's destruction of the earth and the creatures on this planet, your artwork touches me very deeply and frankly brings tears to my eyes. What drives you to paint animals in such a thoughtful and evocative manner?

Madeline von Foerster: Thank you for this touching compliment! I feel the same way you do, and that is a major passion that inspires my work. Every time I feel like giving up on painting (which does happen once in awhile), there are two photos that I look at. The first is of a tiger with his paw utterly mangled and destroyed in a leghold trap, painfully awaiting death for no other reason than despicable human greed. The photo upsets me so much that I can hardly look at it, but I force myself because it fires me up so much.

The other photo is by nature photographer Nick Gordon. It is a remarkable image of a jaguar hunting in the twilight of deep, thick forest. Her long body flows out of the shadows; the patterns on her coat punctuate the dim green light in a way I can only compare to music. The concentration on her face is so vivid that you can practically hear what she is hearing, smell what she is smelling. There is no other image that for me quite so imparts the immeasurable, intrinsic worth of a wild animal, and the forest that is her life support. I find this magnificent jaguar far more real than one seen in person at a zoo.

I suppose you could say the conflicting realities expressed in these two photos are the reason I make art.

MH: What's more challenging for you, the execution or the idea?

MvF: I put a lot of effort into both, and both are quite challenging. 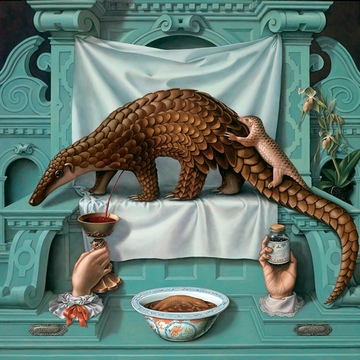 MH: If you could travel in a time machine, would you go forward or backward? What era would you visit and why?

MvF: I would like to go back in time, to Pleistocene South America, to hang out with glyptodons and giant sloths.

MH: Do you have a garden? What do you grow in it? What are your favorite types of plants?

MvF: I live in the city and like it that way, but unfortunately that also means no garden. I dream of having a nice balcony someday, for a few herbs and flowers. For several years I had a great fire escape that hosted a rotating cast of flora. The best was maybe a passionflower vine, which climbed luxuriantly over the railings and produced large, startling flowers.

I have so many favorite plants, but one which I would love to grow is Night-blooming Cyreus. This is an epiphytic vine that is pollinated by bats, and blooms only one night a year, typically during a full moon (how is that for Byronic excess?). The white flowers are approximately the size of a dinner plate, with a heavenly aroma that pervades the entire surroundings. I would love to have this plant, and throw a party every year on the night that it blooms. It would be so fun to serve food and cocktails paired to the flower's fragrance.

MH: What do you dislike about the art world? 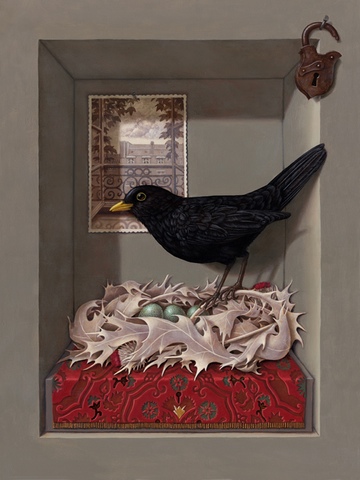 MvF: My main dislike is one that concerns pop culture at large, but which is also very present in the art world. There reigns a cynical trend of irony and self-reference, where sincerity, beauty, and even originality are increasingly unwelcome. I think this is especially unfair to younger artists, who arrive idealistic and full of dreams, and then discover they are expected to put figurative air-quotes around everything they do. There is a kind of poverty of imagination in this that I find really bleak.

MH: Name something you love, and why.

MvF: As I write this, my man and I are traveling home from a trip to Ghent, Belgium, where we attended the opening for an art show I am participating in. I wish to say that I love the city of Ghent! And here is why: It is the most beautiful city I have ever encountered, that is still a thriving metropolis. The astonishing inherited beauty of the place is not taken for granted; nor is it preserved in a bell-jar, not to be touched. It is inhabited, cared for, and cultivated, like a garden.

Walking around Ghent, one sees no advertising anywhere. Instead of ugly streetlights, almost indiscernible floodlights strategically illuminate the exquisite architecture at night. There are practically no traffic lights, even! But bicycles far outnumber cars; drivers are polite, and traffic moves smoothly and swiftly. In the middle of the city is an enormous stone castle from 1180. In most cities, such a thing would have been demolished at some point. The citizens of Ghent utilized this structure in many ways over the centuries; it was a prison, a cotton mill, and houses were even built over its premises. But, my point is, enough of it was left intact that later generations could restore and enjoy it. A city is a design experiment conducted over millennia. But typically, present-day choices are not made with the inhabitants of the distant future in mind.

Perhaps in light of all this it's not surprising that as a visiting artist, I received VIP treatment! Visiting Ghent was a tremendously moving experience. I am awakened to what is possible for a city, when intentionality prevails, and beauty and quality of life are prioritized.

MH: What is the promise in your Promise painting? 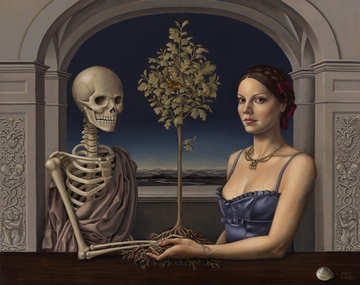 MvF: This is a very personal work. The first promise inherent in the image is the certainty of death. I drew the self-portrait, and then reversed it to draw the skeleton, because the death figure is meant to be my own. The oak tree growing between the two subjects represents the more significant promise: that our atoms will rejoin the life cycle and become part of other wonderful life forms, just as they had other lives before becoming part of us. In this beautiful way, we attain immortality, even when our individual consciousness is only a brief flicker in the course of history. Our atoms cycle on, and if they had consciousness, I'm sure they would thrill at the many miraculous and different life forms they get to comprise, as well as soil, stone, and, long ago… stars.

MH: What is the best piece of advice you can give?

MvF: Since your journal is for writers and writing, my advice concerns a topic very close to those of us with creative passions: rejections and failure. My very perverse advice is to try to accumulate as many of these as possible! And, if you can't love them (I'm not sure anyone can), attempt to take pride in each one. Why? Failure is actually a great sign that you are putting yourself out there. LOTS of failures mean you are really up to something! So, fail more; fail a lot more. The more failure I have been willing to take on, the more success I have enjoyed, and I believe the two are closely related. In the immortal words of Wayne Gretzky (!), "You miss 100% of the shots you don't take."