Barton McKinley in re Brian Despain 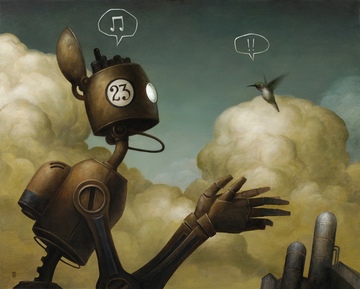 Editor's Note: When we contacted Brian Despain, this issue's featured artist, for a blurb on the piece, he did us one better. Despain hooked us up with Barton McKinley, who wrote an entire short story about another of the pieces we were considering for the issue. The piece, The Exchange, is thumbnailed to the right, and the story, 23, is below. You can click the image to get a larger view. Enjoy.

23 had been walking for exactly 100 days. The skies had lost the grey of winter as spring progressed, but the days were still short and cool in the mornings.

As he walked, the crunching of his feet on the gravel was punctuated by a hissing and grinding from his right leg and an occasional jitter within the rhythm of his stride. All around was quiet though, desperately so. He was completely alone now.

"He" was of course an "it," always outside the world of men that he served although there were many others like him.

In fact, his search for the Masters had taken him past tens of thousands of other bots and mechanisms. But he had found neither community with them nor any support for his search. All he passed just laboured on, like perpetual motion machines. Factories chugged, buildings were cleaned and roads were kept in perfect order. All was shining and bright, like new, ready and waiting for the approval that would never come.

They had all needed the Work; it gave them purpose and meaning. So, they continued without noise or complaint or comfort, until they ran down. They weren't perpetual motion machines then.

Sadly, this was the great irony of 23's world; for while the bots serviced the Masters only a Master was allowed to service a bot and the Masters had gone away just as winter had arrived.

In the last few weeks, 23 had seen more and more of the ended ones. Un-serviced, out of energy and out of time, they would simply stop in mid stride, stroke or reach. No more fastidious labour. No more loyal service, just the respite of ending. Once he had walked for an entire day through fields filled by crops blowing in the wind and bots simply rusting. On another occasion he had spent two precious days searching house to house for one of the Masters. All the domestic bots had stood silent, like mannequins waiting for someone to change their pose.

With each day that passed, the silence extended and 23 walked on.

However, 23 was different from the others. He was one of a few who had been given the ability to plan and improvise. These abilities were what made it possible for him to deviate from his assigned tasks to go in search of the Masters. He planned to find them and inform them of the need to service the bots. He was certain they would be pleased and would come back so order would return to the world. And life, robotic life, could continue.

It had been a long and fruitless search.

But 23 had also been gifted with the Reward. Although somewhat miserly, this very rare gift allowed 23 to switch on one or more emotional states for a limited time. Over the decades, when he needed to consider human responses to his plans, he could "feel" happiness, sadness, optimism and various other emotions.

At first it had all been muted, like the fading colors of flowers come autumn. But he had practiced and learned to tune and strengthen each of the emotions making them discrete and strong. He had learned, through interaction with the Masters, which emotion was appropriate for various situations.

He had often felt gratitude in those moments and, somehow, closer to the Masters. Once, in the University where he had worked, he had explained this and the Master had laughed. 23 had been happy thinking that the Master understood.

Over time, he began to treasure the emotions, scheduling the times when he could feel. Each instance, each emotion, was like the rising – or setting – of the sun – glorious, beautiful to behold, although so very brief.

On this journey, 23 had only allowed the positive emotions to run. Only things which would further his plan could be spared energy and cycles. And so, each time he had stopped he had allowed himself to feel happy at the collapse of yet another of his kind, humoured by the bitter bite of winter cold and optimistic at the grinding in his leg.

Now, though, he had determined that he could be more "natural" with his feelings. Like the others of his kind, he was finally running down. Even with his final reserves, he had calculated that he could last for only another hour or two and then he too would end. He would go silent and still, waiting for the day when the Masters came home.

To make his power last into the second hour, he would have to stop moving. So, with the sun up and the sky pleasantly clouded by the smoke of industry, he decided to sit and wait for the end.

Time passed and 23 accessed many memories, allowing himself to feel happiness at the remembrances. He remembered learning and interacting with the Masters. He remembered 24 and 16 and how they had all helped each other in the labs. He remembered the day he was powered on for the first time.

More time passed and 23 spent much of it running various scenario models, each of which concluded with the return of the Masters. He felt satisfaction.

He also listened to the wind, the rustling of leaves blowing past on the ground and the quiet ticking of his clockwork heart. He closed down his optics and focused solely on sound.

But all too soon, an hour and then another passed and he calculated that he had only minutes remaining. 23 allowed himself to feel a deep sadness.

Then he heard a new sound. It was a fast thrumming noise, syncopation of the air, that grew louder and nearer.

23 restored power to his optics and immediately saw a small bird flying toward him. 23 had not seen a bird in many years. He knew this was a rare event and he allowed himself to feel curiosity.

Slowly, carefully, he extended his arms and raised his hands like a supplicant seeking one final blessing. Then, processing audio files he did not know he had, he made what he considered the appropriate bird song in greeting: "Chirp! Chirp! Chirp! Hello little bird." He allowed himself to feel anticipation and joy.

But startled by this unlikely occurrence, the bird stopped its flight, hovering and chirping in reply.

So 23 waited, watching wondrous and expectant until gradually the little bird flew closer. And then, suddenly, as if the need for caution had been forgotten, it put on a burst of speed and flew around his head several times. It hovered for a moment and then landed on his outstretched hand.

23 felt astonishment. He realized he was no longer alone. Then, with his last remaining power, he released all control and felt ecstasy!

He had never felt anything like this before. It was more than happiness, more than joy. In its nascence, it felt as if a brilliant and wonderful new star had blossomed in all of his circuits, sensors and processors. His "mind" emptied of tasks and duties and the search. It was the most perfect moment of his existence and it seemed that it might last forever…

Time passed and the bird sat for a while. Resting and preening, it was content to wait in the shelter of 23's form as the day began to warm. When it was finally ready, it spread its wings and hopped over to the edge of 23's hand. It paused and looked all about and then up at 23 as if it was waiting for some signal, which would never come.

When it finally did fly away, if it allowed itself to feel anything for the great metal thing it had rested on, it may have been wonder.