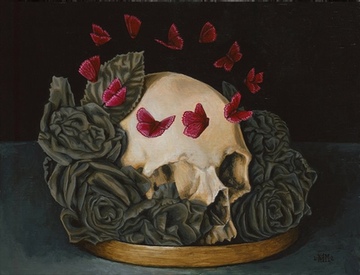 Editor's Note: In addition to kindly allowing us to use Ex Dono Dei as our Fall Edition graphic, featured artist Kristin Forbes-Mullane also agreed to an interview with Menacing Hedge. You can click the image to get a larger view, and see more of her work at kfmgallery.com.

An Interview with Kristin Forbes-Mullane

Menacing Hedge: If you could have just one super power, what would it be? 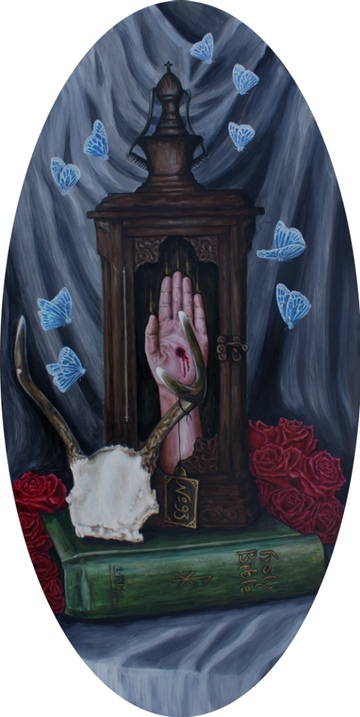 Kristin Forbes-Mullane: Invisibility – the things you could do with that are pretty much endless. I would use this power for good, mostly.

MH: If you could travel in a time machine, would you go forward or backward? What era would you visit and why?

KFM: Can this time machine freeze time? Because if it can, I'd just freeze right now or maybe the next time I'm on vacation someplace cool. I don't really want to go back in time, although, a simpler time would be great and who knows what the future will be like, so I'd be happy with just more time right now. Maybe add some extra hours to the day. If we could just pause for a while, perhaps we could also fix some things in our environment before it's too late.

MH: Describe the room you work in?

KFM: I have a pretty typical studio in my house with art supplies everywhere, the walls covered in previous paintings, computer, etc. But, a few years ago I stopped painting in there and moved my easel out to the main room of the house. It was really one of the best things I've done because now I'm not all by myself. Not to mention the light is better and there's more room for the dogs to lie around me while I paint.

MH: Do you collect certain objects to inspire your work? Can you describe them?

KFM: Yes! I'm all about collecting objects to inspire my work; most of my ideas come from things I've collected over the years. It's probably weird, but, the other day I finally got my hands on an antique articulated dental model (score!) that I've been trying to find for a while, odd taxidermy, a friend gave me a taxidermy puppy that he found at a thrift store, antique glass holy water bottles, skulls and bones of all kinds. If it's weird and old, I'll probably love it. If it's creepy AND religious, then I'll really love it.

MH: Do you have a garden? What do you grow in it? What are your favorite types of plants? 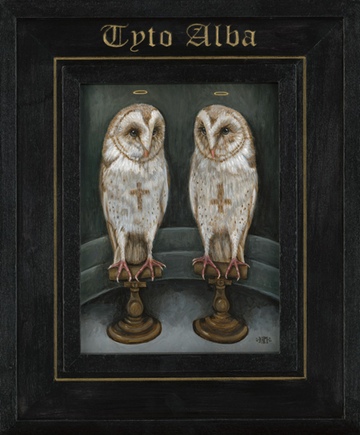 KFM: I wish I had a garden, but, sadly I do not. Right now my favorite plants are those that take almost no water to survive and are hard to kill. That's a winning combination when summertime temps hit close to 120 degrees.

MH: If we came to your house to dinner, what would you serve us?

KFM: Probably beer, I've heard there's a steak in every one.

MH: If you have pets, describe them, and tell us something about their personalities.

KFM: I have a Great Dane named Jack and a Pit Bull mix named Baxter. My husband and I adopted them at about the same time when they were puppies, so they've best friends. Jack, who is sometimes called Jackson Brown because he liked to eat poop when he was a puppy, is huge and super goofy. He's definitely the jumpiest, springiest (I don't think those are actual words) Great Dane I ever seen. He runs around the backyard and jumps as high as he can so he can see over the walls. I'm sure it's a crazy sight from the neighbor's house. As for Baxter, he's basically a little bear in a dog costume and I believe his entire purpose in life is to snuggle. Baxter is smart little guy… I've heard that dogs that make really loud, exaggerated yawns are smarter than dogs that don't. Baxter constantly loud yawns at us when he's excited or wants something. Sometimes I think he can read minds.

MH: What do you think about when you are alone in your car? 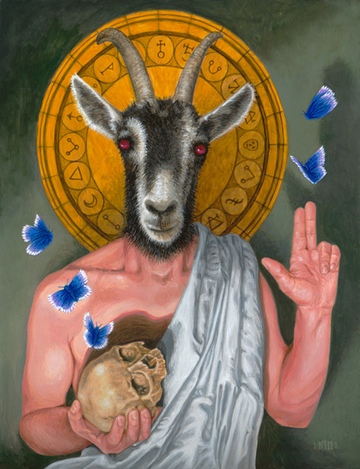 KFM: Mostly art and escaping life in the city… I turn the music up and dream up new paintings and what I would do if I could just pack up everything (husband and animals) and just run away, never to return. I actually come up with a lot of great ideas there. I just realized that maybe that has had some reflection on my work; the freeways in Phoenix can be pretty terrible. This type of daydreaming can have its downside though, sometimes, I realize I've probably stopped paying attention to the road. (Sorry other people)

MH: What's more challenging for you, the execution or the idea?

KFM: I guess I would say the idea, but not because there is a shortage of them, but way too many. I'll never be able to do it all (see the question about the time machine)…. Deciding which one wins the cage match in my mind is tough sometimes.

MH: How has your practice change over time?

KFM: When I first started painting, I was all about getting my idea on to the canvas as fast as possible and then moving on to the next idea. At some point, and I'm not really sure what triggered it; I realized that if I just slowed down and took as much time as I needed, I'd end up with a better painting in the end. I went from spending just a few hours on a painting to a few weeks and then to at least a month. I also started taking more photos of work in progress. I'm always amazed by what I see in a photo on my phone that I didn't see when standing right in front of it. A few years ago I also stopped painting on canvas and now only paint on wood. I think just these 3 things made a really huge difference in the work I produce.

MH: What's your strongest memory of your childhood? 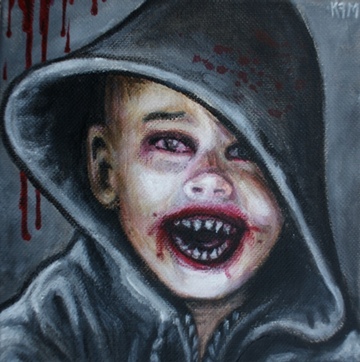 KFM: Growing up, my parents flew hot air balloons. I remember the first time I ever saw them go up in a balloon, I stood on the ground and watched them float away. I was little and it seemed like they were just going to float up and up and up never come back.

MH: What is the best piece of advice you can give?

KFM: Always be learning something new or practicing the skills you already have. Don't concern yourself too much with what other people are doing. Everyone is on their own path in life. Worry about yours and not everyone else's. Also, turn off the TV.